Replace macro variables with words, phrases, paragraphs, and include other macros, and entities, in the macro definitions

Search and install ​the plugin using the Extension ​Manager. If you cannot use the DokuWiki download Manager to install this plugin, install it manually. Refer to manual instructions for how to install plugins manually.

This plugin provides an administrative panel where you enter macro names and their substitution texts. These are saved in the meta directory (in meta/macros/macros.ser). In farms, you can choose to have a database for each animal (see: configuration_and_settings). You can save individual words, and strings of text, including lengthy paragraphs. The substitutions accept html, quotation marks and other punctuation. The macro names can accept spaces, dots, underscores and hyphens.

So, Macro_1.txt is a valid macro name and could, for instance, have the following substitution: /var/usr/lib/php/readme.txt.

You could have a footer message, FOOTER-1, which has the following text substitution:

The textinsert plugin will allow you to create macros for extended texts. You can create paragraph length texts with HTML markup which has to be repeated on multiple pages. If you want the HTML to be rendered as such, then the macro name must have the _HTML suffix:

Note: The underscore is required.

Some of the functionality of this plugin at its simplest can be implemented with DokuWiki's own entities facility: entities. But for complex substitutions and for control over where and how substitutions are made, Textinsert offers a wide variety of solutions and techniques.

One advantage of TextInsert comes when dealing with extended blocks of text and with its ability to include other macros inside the primary macro definition. That is, it can accept:

It accepts only one level of macro inclusion, so that if MACRO_3 were included in MACRO_2, MACRO_3 would not be rendered. If an include macro requires treatment as HTML, then the primary macro must be named as an HTML macro.

The final result would be: This macro can include a second—macro—inside it.

Textinsert will accept namespace replacement patterns, as used in DokuWiki namespace templates. See Namespace Templates for the list of these. Textinsert can accept all but the MAIL and NAME macros, which go out of scope when the page is saved. Like regular textinsert macros these can also be embedded in other textinsert macros; see macro_inclusions. For instance, a macro named current_user and a user named jack:

This would give you: The Current user is jack.

There is a configuration option which governs whether or not standard namespace macros are accepted. It is set to true by default.

When used in a sidebar the standard namespace macro ID resolves to the id of the sidebar page. To get the id of the currently displayed page, use instead _ID_. This macro can also be used for macro_inclusions. So, for instance if you wanted to display the result as a wiki link, you could do this:

If you use _ID_ in your sidebar, then you must also insert the ~~NOCACHE~~ macro into the page so that the ID updates with each change of page. See control_macros.

If you want to create multi-pragraph blocks, then you need to use the HTML paragraph tag, <P>. . .</P>. The textinsert plugin will accept paragraphs like the the following, which is the introductory header found on the textinsert administration page: 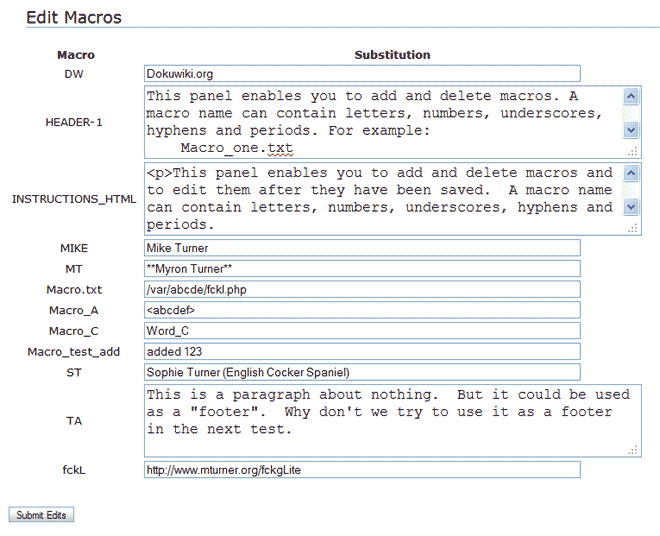 The Macro names are case sensitive, so that Macro-A and macro-A are two different names.

The current version of textinsert handles foreign language translation and supports macros which accept parameters. If you don't need these features or if this version causes any issues you can download the earlier version: simplified version.

Macro Definition as defined on page:

Parameters may use the basic text formatting syntax: bold,italic, etc. The one exception is the internal newline. If you need this you must use \n.

Comments are allowed but not included in the final output.

The final result will be the same as for the single line syntax, as shown above in the example for the basic_syntax.

“Multi-line” also means that parameters and parameter format can continue across line boundaries:

In order for this to work, the commas must be escaped, since they represent parameter boundaries: \,.

Macros of this type must use the following syntax:

A default entry for this type of macro must be entered into the textinsert database as LANG_name. The translation strings must be stored in textinsert/lang/<ISO>/lang.php in the $lang array, using 'name' for the key. If you have a macro named LANG_greeting, then in lang.php the entry will be:

If a translation is not found, the default string will be used.

Use of lang.php is deprecated. See improved language localization below for an updated method of storing translations.

This example is based on the namespace de, which references German pages.

You create a page named de:my_file into which you enter the following macro: #@LANG_greeting#@. In the database you enter a default entry under the name LANG_greeting. In textinsert/lang/de/lang.php, you create an entry for $lang['greeting'].

In each lang.php, you need only a single entry, for instance:

When you include #@LANG_greeting@# in your document, the country identified by the IS0 namespace will be printed with its HTML formatting.

To use the earlier example:

Translation macros can be included in standard and HTML macros. They also accept DokuWiki-defined entities, as described above. There is no special HTML translation macro. Any HTML features which appear in a language-based macro will automatically be output as HTML when the macro occurs in a language context.

If the default replacement string contains HTML, then you should use form 2 in the above table when not in a language context; otherwise the HTML will appear in your output as plain text and the HTML will be lost.

In a language context, any HTML that you place in your definition will be output as HTML. Assume this is the definition for LANG_nation in the lang/de/lang.php:

In the German namespace, #@LANG_nation@# will be output as HTML: Ich lebe in Kanada.

It is also possible to include macros in your translations:

This results in: Ich lebe in Berlin, in Deutschland

There are two configuration settings.

All earlier questions have been moved to discussion. Additional questions should use github issues. Thanks.

1)
This is consistent with the scheme used by the translation plugin.
plugin/textinsert.txt · Last modified: 2020-07-26 03:27 by turnermm