Provide figure and table captions with reference and automatic numbering

Please refer to the plugin homepage for the original installation and documentation guide (note that instructions are only available in German).

The plugin basically provides two different syntax elements, similar to the blockquote plugin, one for the outer block (figure, table, codeblock, fileblock), one for the caption:

<caption>…</caption> should only ever be used within one of the other two environments.

Within the syntax elements, almost every other DokuWiki markup is allowed.

The caption environment provides for automatic numbering and the output of the string “Fig.” or “Figure” (and corresponding for the tables, code and file blocks).

Whether the abbreviated or spelled notation is to be used can be set via the configuration interface of the plugin. The respective strings are localized, localizations for German and English are currently available, others can be easily installed if necessary 1) .

Note: In DokuWiki almost everything is allowed within a <caption>, but you should be aware that e.g. footnotes within a floating environment are not allowed in LaTeX. 2)

The original restriction by the parser that only references to already defined figures / tables were resolved has been fixed 3) .

The same applies to the tables. This means that the (optional) label is defined in the opening tag of an image / table 4) and via the structure

Note: If a label / table has a label defined, this will be displayed as a “hover” text (“tooltip”), if you move the mouse over the respective beginning of the respective label (“Fig[ure] n” / “Tab[le] m”).

Sometimes you would like to control the numbering of your figures/tables/… This is possible as well (new 2021-09-29). You can (re)set the counters everywhere on your dokuwiki page, and independently for all kinds of environments (figures, tables, code and file listings). Suppose you would want to set the counter for figures to 5:

Note: You can only set the four defined types (figure, table, codeblock, fileblock), and you can only use integers.

And that's how the DokuWiki markup could look like: 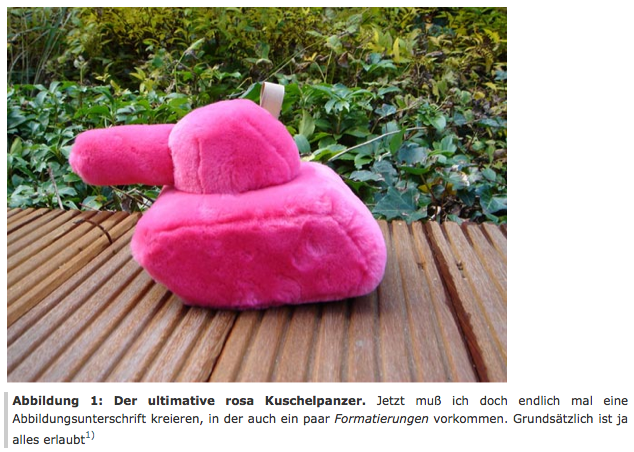 or analogously for a table:

The individual elements are as far as possible separately addressable and adaptable via changes to the CSS file of the plugin.

The following is an example of the XHTML code generated by the plugin, specifying the appropriate classes.

Basically, it is important to format the image subheadings and table headings so that they are as clear as possible from the surrounding body text (especially if they span multiple paragraphs, which may be less common, but may well occur).

The DokuWiki configuration interface can be used to set whether the over / signatures begin with abbreviated or advertised “labels” (“Figure” vs. “Fig.” / “Table” vs. “Tab.”).

The “labels” are initially available in German and English via the standard localization of the plugins, but can also be supplemented for other languages ​​if required.

Search and install the plugin using the Extension Manager. Refer to Plugins on how to install plugins manually.

1)
according to the guidelines and structures of DokuWiki for multilingualism.
2)
An appropriate automatic handling of footnotes within the scope of the dokulatex plugin within floating environments is (at least for the moment) beyond the possibilities and the reasonable amount of programming effort.
3)
The “trick” is a little rough as it is a search & replace in the already parsed part of the current page.
4)
Pay attention to short, concise but meaningful labels. Since the same labels are also used in the case of LaTeX export in LaTeX, all limitations of LaTeX labels apply: no special characters such as umlauts, no spaces
plugin/caption.txt · Last modified: 2021-09-29 15:45 by tbiskup