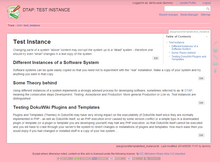 I agree that there should be a way to change local style.ini or userstyles easily. The main reason why I wouldn't use something like this template is maintainability. Most (if not all) of these types of templates (which use an existing one and only change very little) end up being unmaintained, and when a new DokuWiki version comes out, this will be out of sync with the original. It's also not easy to see the difference between various versions of templates. Depending on your technical expertise, you might also want to consider preparing a patch (diff or git) against DokuWiki. That makes making a change like this (and potentially others) to the existing code base as easy as running one single line in the shell. — Anika Henke 2014-05-05 16:10