A plain template based on Starter with a responsive, semantically-marked layout and a logical reading order. 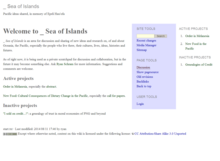 The Benjamin template is a close study of Anika Henke's Starter template. Starter's main strength is that it's set up in a really orthodox way so that it is clear how a template can inherit the basic forms of Dokuwiki and extend or replace certain parts without changing the presentation of anything else. Likewise, this template just makes a few tweaks to subordinate stylesheets and inherits everything else.

The main tweak is that it puts the main page regions of the main.php template in a logical linear order, from most important to least important. Second, the structure.css file and some of the design.css file have been rewritten to give an adaptive multicolumn layout. As the viewport widens, subordinate (lower) elements are displayed to the right of the main content. The result is a plain textual Dokuwiki skin that works on small phone screens, tablets, and multiple widths of browser window.

The current version is functional but probably lacks enough polish to be useable on a regular basis. I've edited main.php but the other main template files, mediamanager.php and detail.php, are the same as Starter. Most basic functions work, but often elements overlap where they shouldn't. It's a process.

This is also not only my first DW template, it's also my first public opensource project and my first time to use Github. Please don't assume I intend anything because I have no idea what I'm doing. Feel free to advise, suggest, comment or complain.

Refer to template on how to install and use templates in Dokuwiki.

In honor of Benjamin Lee Whorf

Benjamin Lee Whorf was an anthropologist and linguist of the early 20th century who developed an influential theory of the influence of culture on language.