This plugin allows to move pages and namespaces including media files and automatically adjusts all links and media references that point to these pages. Unlike the old pagemove plugin this plugin uses the DokuWiki parser which allows it to correctly identify all links and nothing else.

Parts of this plugin, like some of the translated strings, some parts of the structure of the code and parts of the user interface have been taken from the old pagemove plugin by Gary Owen, Arno Puschmann and Christoph Jähnigen.

This plugin moves files inside your DokuWiki data directory and can automatically change a lot of pages. Even though the plugin has been successfully tested it is always possible that something doesn't work as expected in your case and your wiki might be left in an inconsistent state. This plugin is also still rather new and might behave incorrectly in certain cases.

Please make a backup before using this plugin, especially if you plan to make larger changes!

Warning: This plugin does not update ACL rules. For example if you had an ACL rule that read-protected a certain wiki page this rule won't have any effect anymore after moving that page.

Install the plugin using the Plugin Manager and the download URL above, which points to latest version of the plugin. Refer to Plugins on how to install plugins manually.

When updating an existing installation of this plugin it might be necessary to de-install the old plugin version first and re-install the new version thereafter. Severe problems (e.g. inconsistent application menues with the old plugin screen combined with several unlogical [admin] buttons) have been observed after upating the plugin. For instance when originally installed on Dokuwiki release 2014-09-29 “Hrun” and updated onto Dokuwiki release 2015-08-10 “Detritus”.

Except for the single page rename, the plugin requires manager privileges to use it.

This is the main part of the plugin. To use it navigate to the page (or page in namespace) you want to change, then open the Admin menu and select the Move plugin from the list of additional plugins.

In the box switch between the current page or namespace and give a new location. Clicking start will preview your changes and you can start the move operation. To move a namespace with some pages in subspaces but none directly under the namespace, use the tree based move method.

To plan more complicated restructuring of your wiki, the move plugin comes with a tree-based Move Manager. Open it by clicking on the link in the Move screen, pictured above.

The Move Manager allows you to plan all moves and renames to be executed by drag'n'drop operations. Simply move pages, media files and namespaces to their desired locations until the tree represents the new layout you want to have. 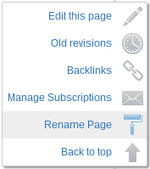 This feature is available to users and groups that have been configured through the allowrename option in the config manager. It is automatically available on all templates that implement the TEMPLATE_PAGETOOLS_DISPLAY event.
Actually it is defined in source code and only available for the templates dokuwiki, arago and bootstrap3 (action/rename.php line 45).

Users can simply rename (or move) the page they are currently on.

Support for other plugins

The move plugin allows plugins to move their own data and to adapt their syntax when a page or media file is moved. Currently the following plugins support this:

Plugins not explicitly stating their compatibility are most probably not adjusted.

Have a look at the include plugin for a relatively simple case of a plugin that handles page moves. These events might be subject to change though I'll try to keep them as compatible as possible. If you add your plugin to the list of supported plugins I'll have a look if I could break it before changing anything that might affect plugins.

Feel free to open a bug report if your plugin needs additional support from the move plugin.

Please report bugs and feature requests in the issue tracker.