No compatibility info given!

Will show bugs from Bug-Tracker Mantis

Most companys not only use an internal wiki, but are also using some Bug-Tracking System. One of these Bug-Tracking Systems is MantisBT. This plugin lets you include the reported bugs from mantis into a dokuwiki page. The two system don't need to run on the same server, as the SOAP-Feature from Mantis is used.

The Mantis-URL, as well as an username/password is configured via the admin-configuration. 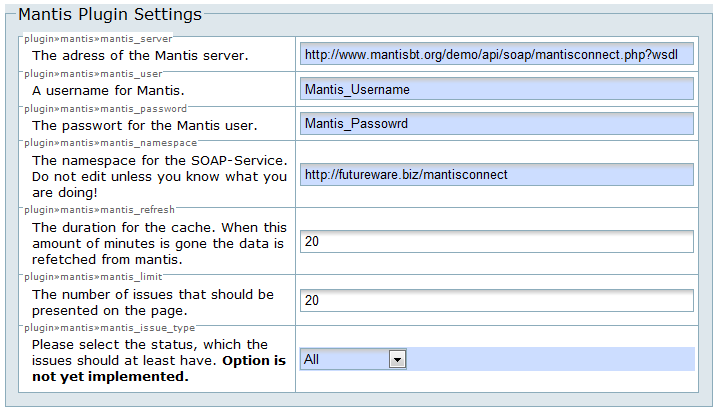 The parameters in the admin-backend are pretty clear, you can adjust the various settings for your needs.

This will include the XX (number of issues is configured via admin-backend) issues from the project Demo.

Tip: you can also include subprojects via the the following syntax:

Plugin should work if SOAP-Extension is loaded via PHP, as well if no SOAP is loaded. Then the already included nusoap-component is used.

Is there a possibility to include projects with spaces? I cannot manage to, so if it is possible, could you please document that? Thanks a lot. Sitaktif

I don't see any reason why projects with whitespace shouldn't work. Do other projects work correctly?

Link to a specific bug

Maybe could you implement a simple link to a specific bug page on the mantis site?

I need this feature too, currently implementing it. A patch should be posted soon.

Done the implementation, need to cleanup some stuff. A patch should be posted here till friday.

So the patch issued? What is the syntax?

Projet names which start with numeric characters produce the following error message:
“Access to Mantis denied. Maybe wrong username/password?”
Resolved if first character in project title is non-numeric
Many thanks for this extremley useful plugin - Igualada

Accents in French and Spanish languages in project summary and description are being displayed incorrectly though both “dokuwiki” and “mantisbt” have been set to UTF8 to the best of my knowledge. Any idea where I can fix this in the plugin? - Igualada


Shoud be enough to add a utf8_decode or utf8_encode (propably decode) in the summary and description line.

Growing on the work detailed here I forked the project and added some fixes.

In case anybody is interested you can find it on GitHub.

As this plugin doesn't seem to be maintained anymore, it would be much better if you could simply adopt it and add your fork as the official download etc. Obviously, try to ask the plugin author first, see also more about adoption. — Anika Henke 2015-03-24 20:00